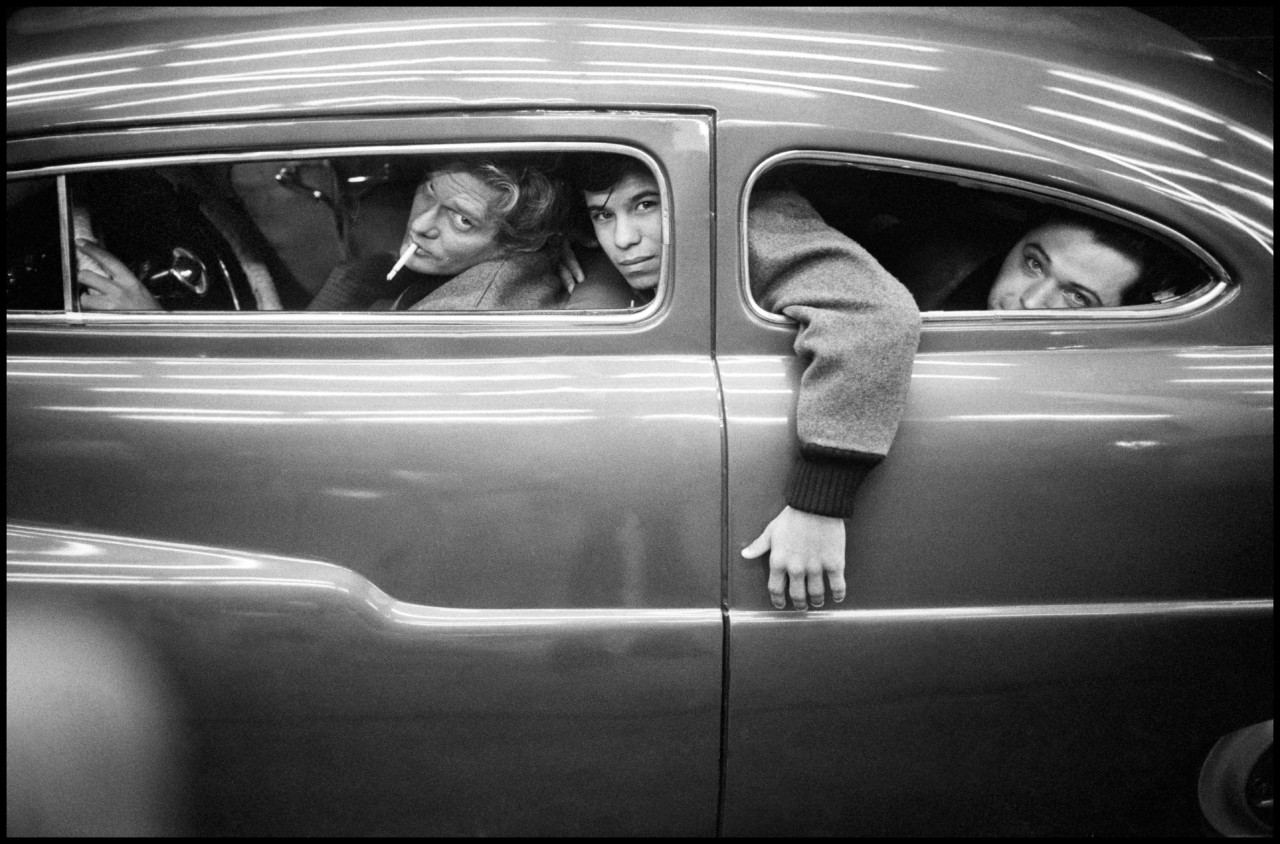 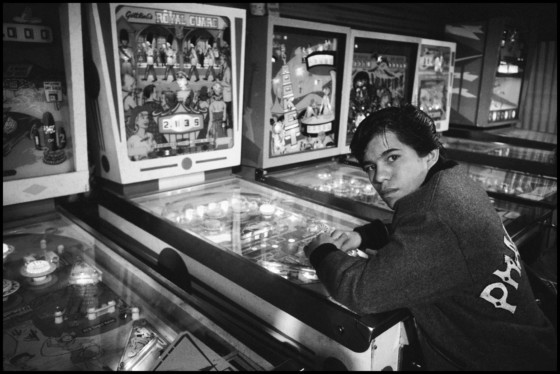 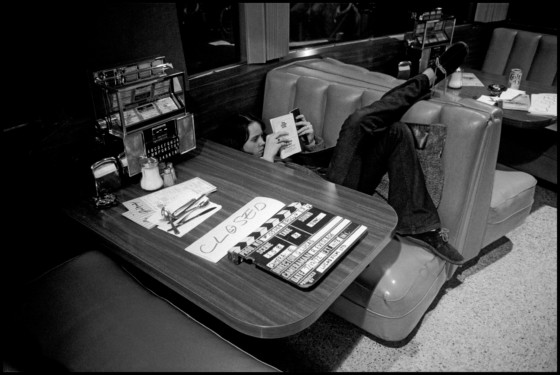 Before Happy Days burst forth onto the television screens —and before the galaxy-crossing capers of Star Wars— there was American Graffiti, George Lucas’ 1973 coming of age tale set in Modesto, California. The rock’n’roll-soundtracked film, following a group of friends throughout a single life-changing night, assisted in propelling the careers of up-and-coming actors including Richard Dreyfus, Ron Howard, and Harrison Ford.

Set in 1962 and based on Lucas’ own formative experiences, American Graffiti is nostalgic viewing, with beautiful classic cars, cruising, diners, and roller-skating waitresses, capturing a much-fetishized era of American history. Made on a $775,000 budget, American Graffiti went on to receive multiple Academy Award Nominations including Best Picture, and established Lucas as one of America’s finest filmmakers. Writing in 1973, the renowned film critic Roger Ebert said, “it isn’t the age of the characters that matters; it’s the time they inhabited. Whole cultures and societies have passed since 1962. “American Graffiti” is not only a great movie but a brilliant work of historical fiction; no sociological treatise could duplicate the movie’s success in remembering exactly how it was to be alive at that cultural instant.” Echoing Ebert’s statement, in 1995, American Graffiti was chosen by the United States Library of Congress for preservation in The National Film Registry. As of 2019, the film has grossed over $391 million. 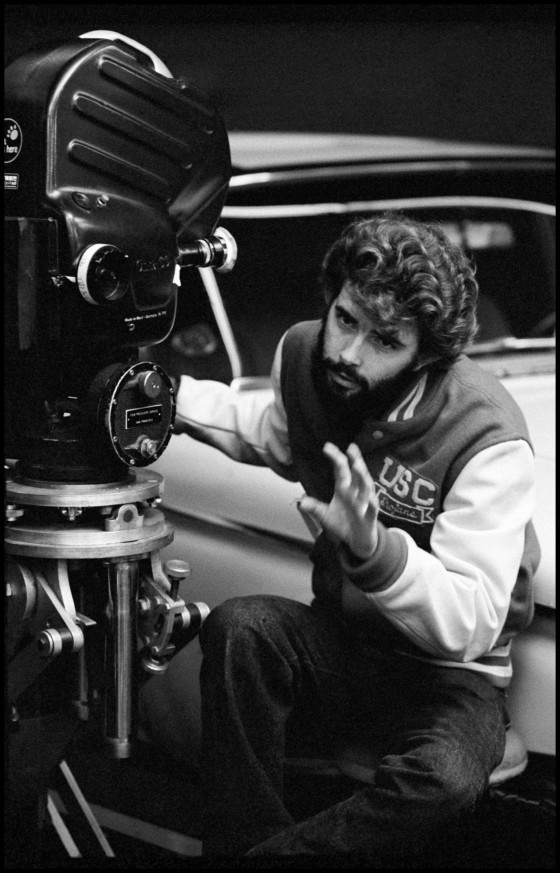 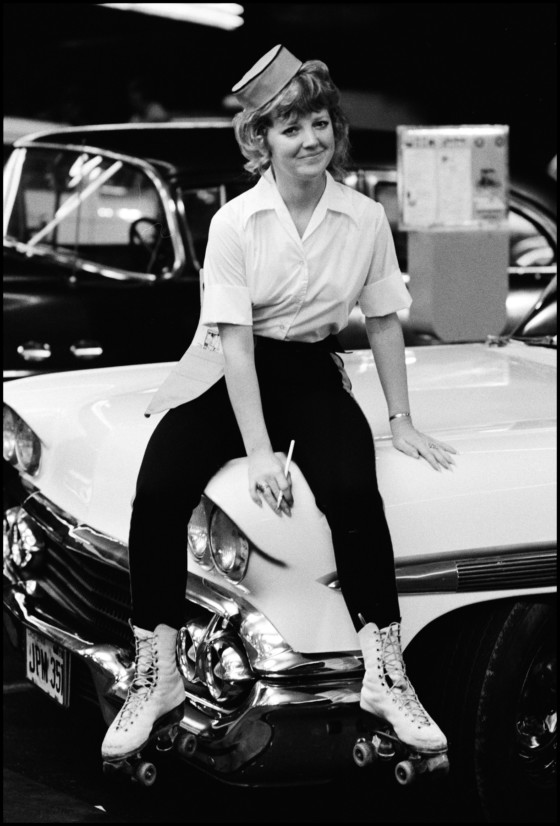 Dennis Stock Actress on the set of "American Graffiti," filmed in and around the Bay Area. California. USA. 1972. © Dennis Stock | Magnum Photos
License | 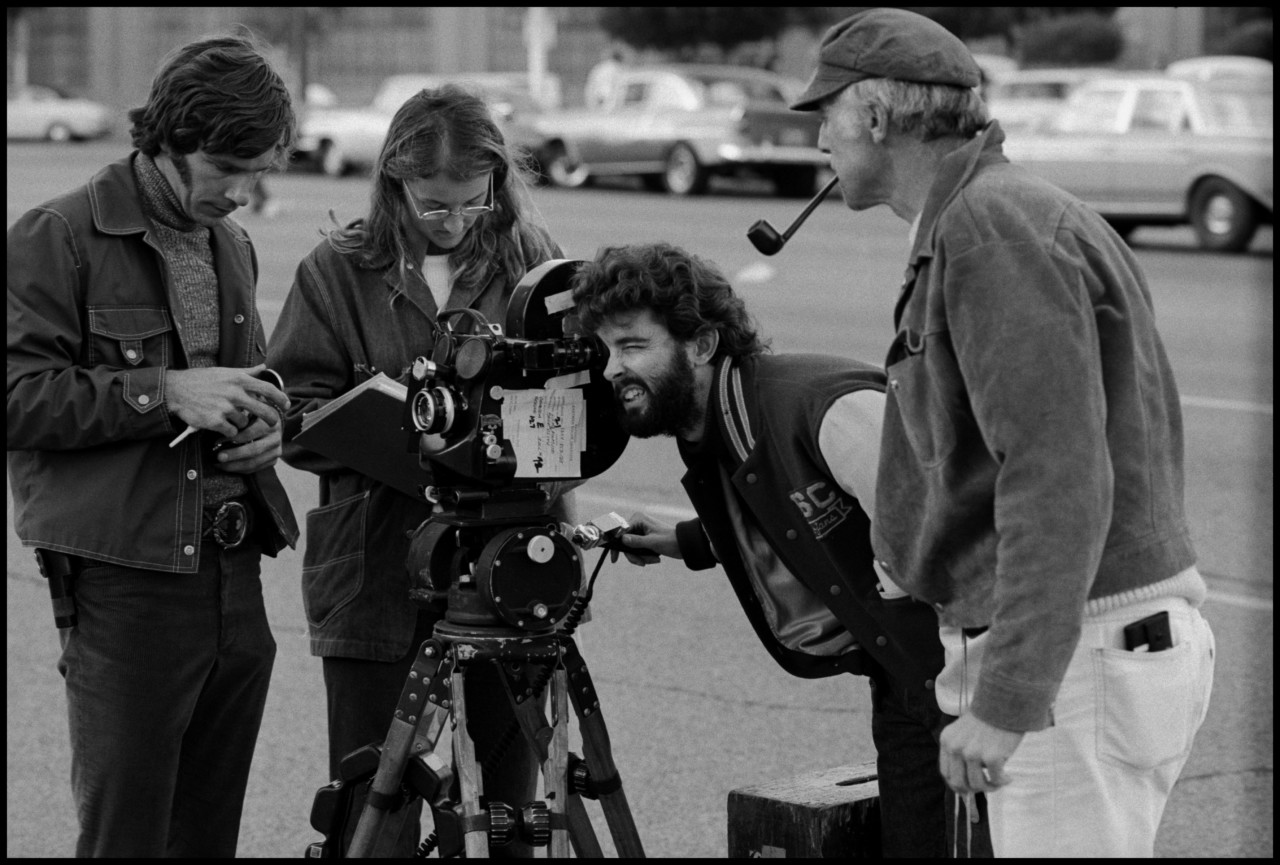 Dennis Stock Writer/director George Lucas looks through the camera on the set of his "American Graffiti," filmed in and around the Bay Area. California. USA. 1972. © Dennis Stock | Magnum Photos
License |

During the movie’s filming, Dennis Stock visited the set and Bay Area filming location, capturing behind-the-scenes moments from the production on ten rolls of film. Stock was famed for his photographs of actors and Jazz musicians, and would forever be known as the photographer who immortalized and befriended James Dean in 1955 with his photo series depicting the young movie star walking through New York’s Times Square. His photographs on the set of American Graffiti possess this same sense of candor and honesty: a young filmmaker and his cast at work and in quieter moments of reflection.

In his role of Curt Henderson, Richard Dreyfuss, whose previous parts were small or uncredited, earned a Golden Globe nomination for portraying the reflective high school graduate contemplating staying in Modesto rather than leaving for college in the morning. In one photograph, Dreyfuss can be seen with a look of contemplation on his face as he leans against his vehicle. In another, he is sat in a car with his hand out the window and stretched onto the roof. He smiles at the camera with a joyful, content look across his face. Aged 26, Dreyfus is almost a full decade older than his character but possesses the quiet, thoughtful contemplation required for the role. We see that the characters in the movie are young men with their lives ahead of them.

Magnum On Set: Rebel Without a Cause 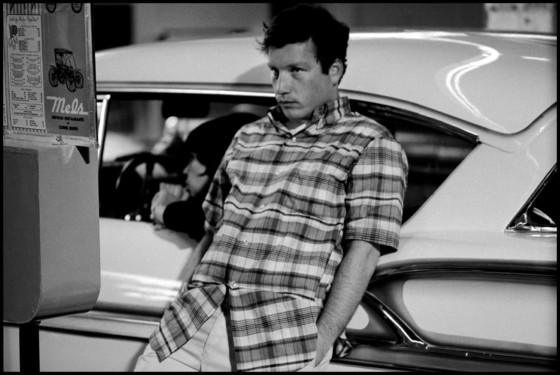 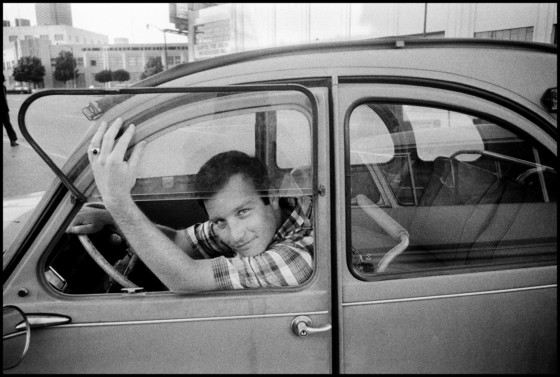 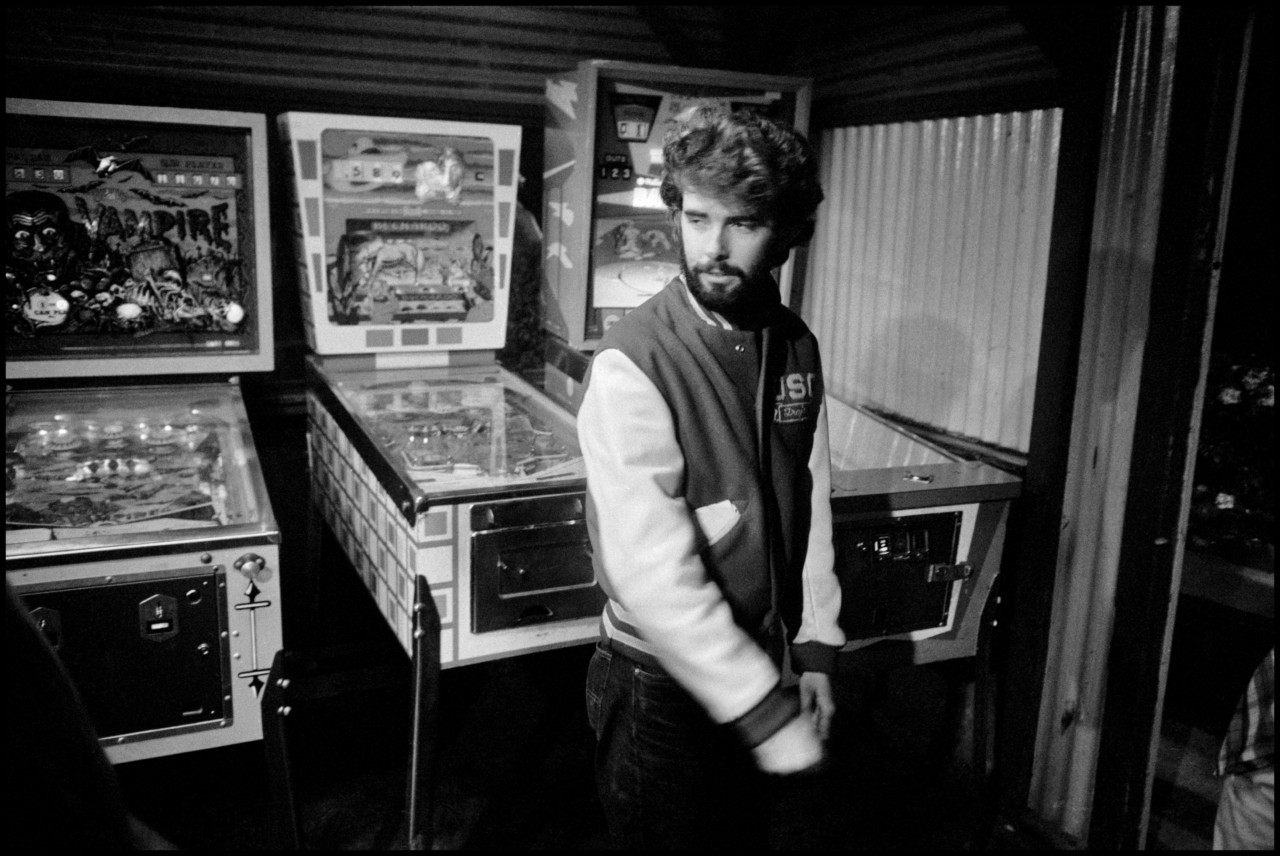 Ron Howard was already a household name having played Opie Taylor for eight years on The Andy Griffith Show. Still, the role of Steve Bolander allowed for an organic transition from a child actor into more adult roles. The following year Howard would find television success as Ritchie Cunningham in Happy Days, and later as a multi Award-Winning film director. In Stock’s photograph, Howard is behind the wheel of an open-top motor. He wears a hooded sweater during a break from filming, his youthful face looking to the camera, an unassuming icon in the making. 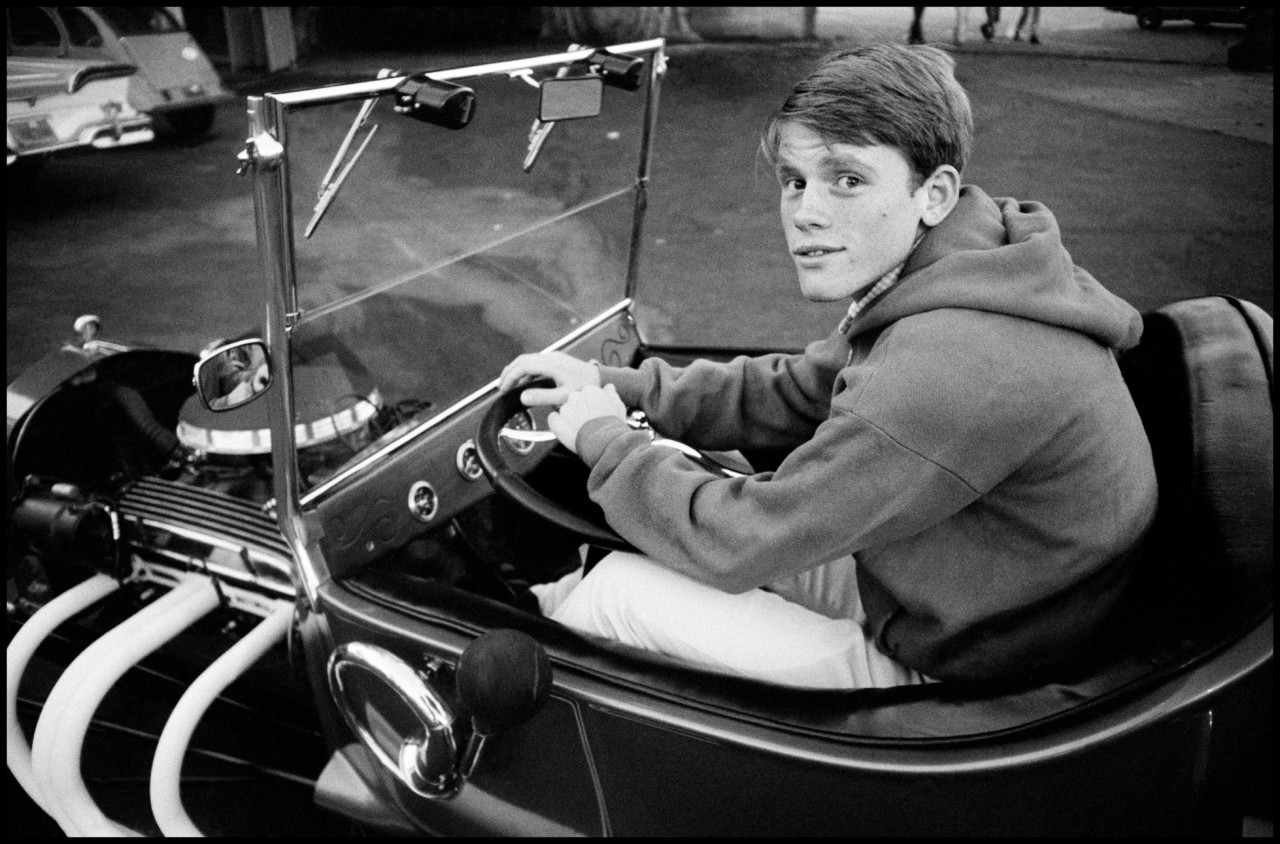 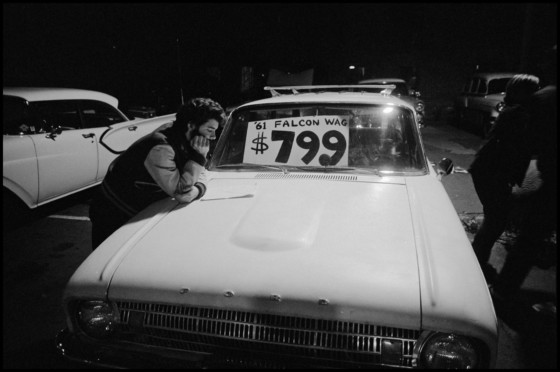 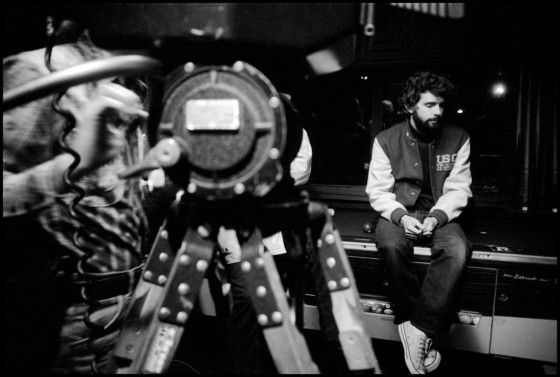 Unlike his co-stars, Harrison Ford appears to have been photographed apart from the rest of the cast. Instead, Stock has captured Ford’s portrait, maybe a headshot, and he seems noticeably stiffer and suited with his hair slicked down. At this point in his career, and frustrated with the roles offered to him, Ford was working as a self-taught carpenter to support his young family. The part of Bob Falfa, a Texan speedster who challenges mechanic John Milner for the title of ‘fastest car in the Valley,’ marked the beginning of Ford’s long and lucrative friendship with Lucas. Four years later he would be propelled to great fame as Hans Solo in Lucas’ The Empire Strikes Back. 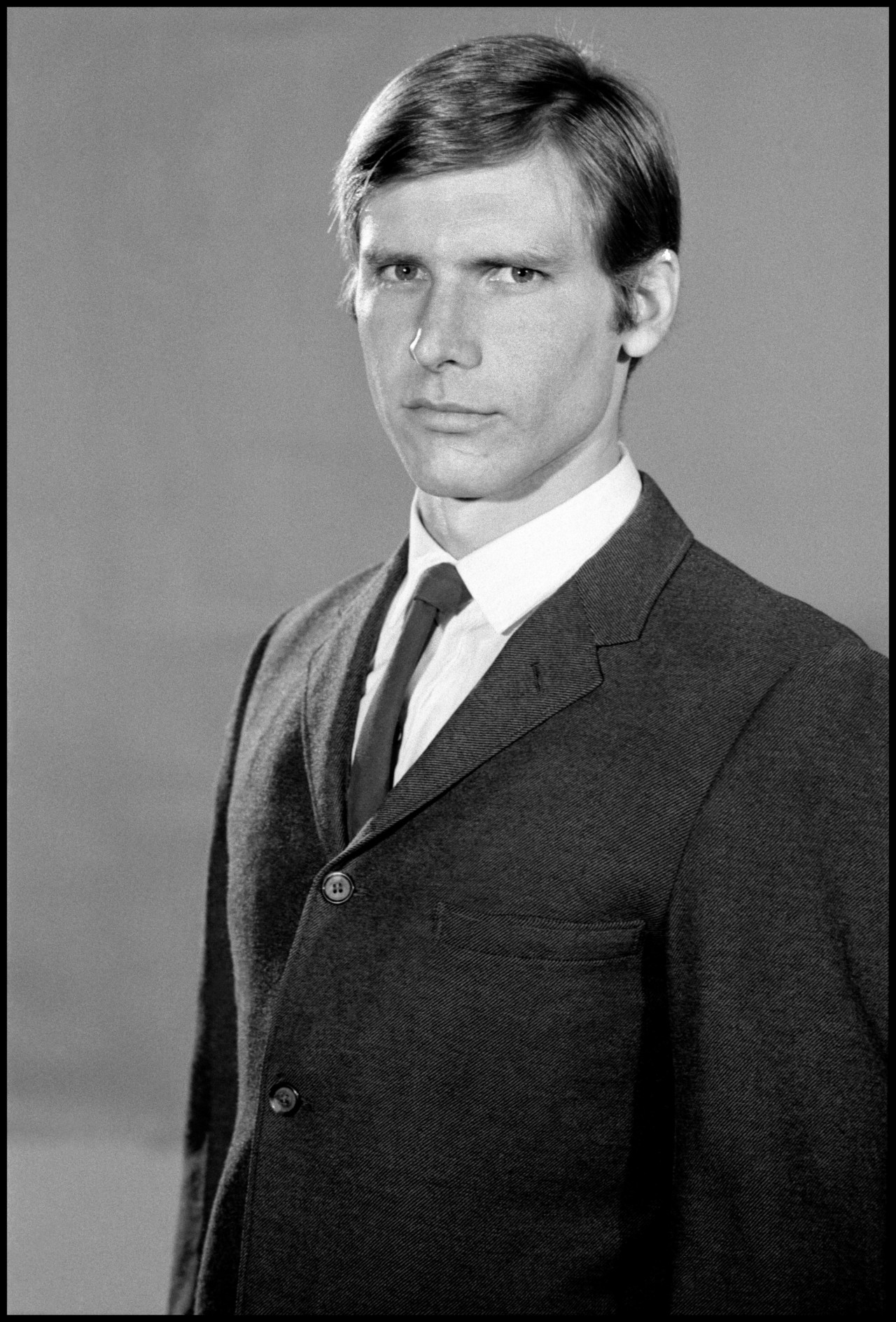 Stock’s lens also immortalizes the women in the film. Candy Clark, in the role of Debbie Dunham, perches against the front wing of her car. Clark would earn an Academy Award nomination for Best Supporting Actress for playing Debbie, the sweet girl with a flirty and rebellious reputation who befriends Terry ‘Toad’ Fields, played by Charles Martin Smith. Cindy Williams had coveted the role but had been cast to play the part of Laurie Henderson, Curt’s brother and Steve’s girlfriend. In Stock’s photograph of Williams, she leans outside the car window, purse in hand. She appears dismayed, most likely in character as Laurie, resigned to spend one final night with her boyfriend before he leaves for college the next day. 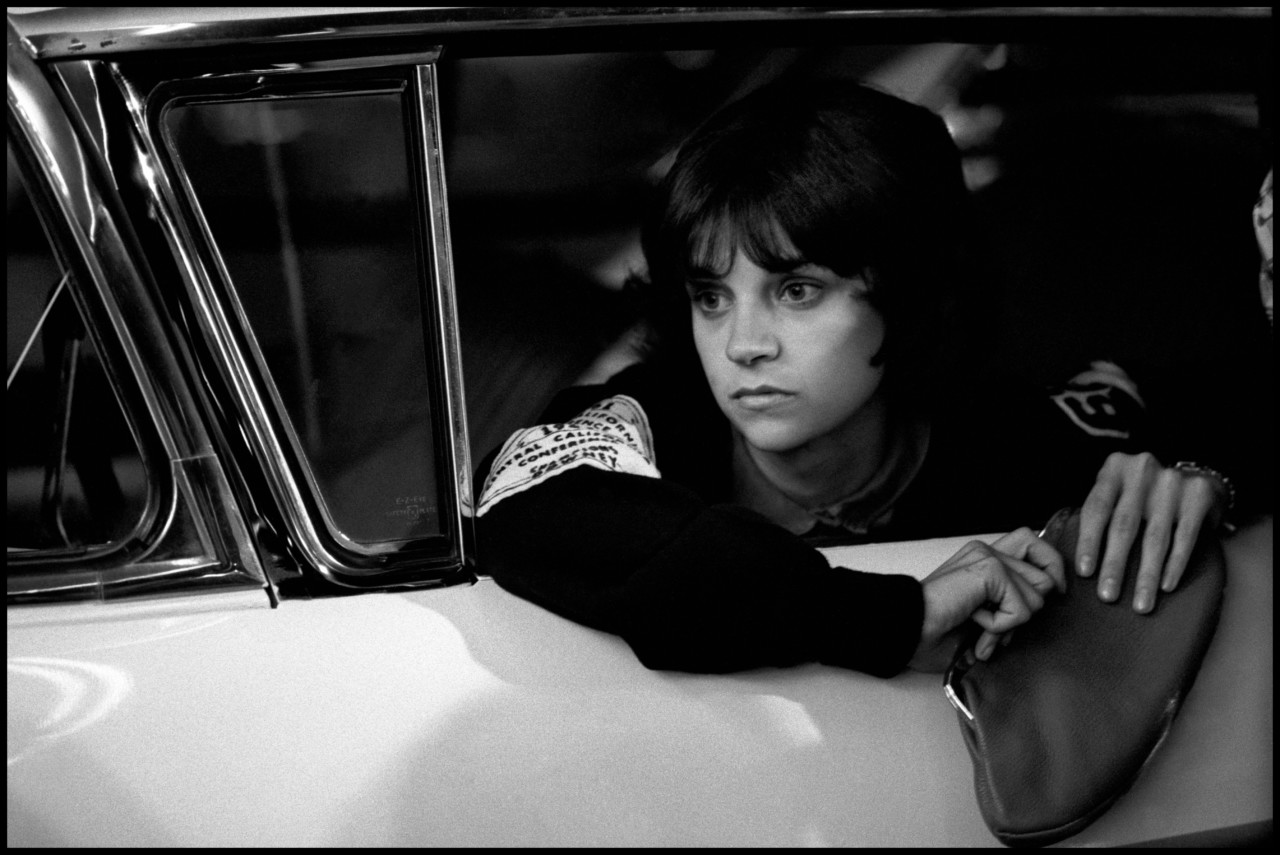 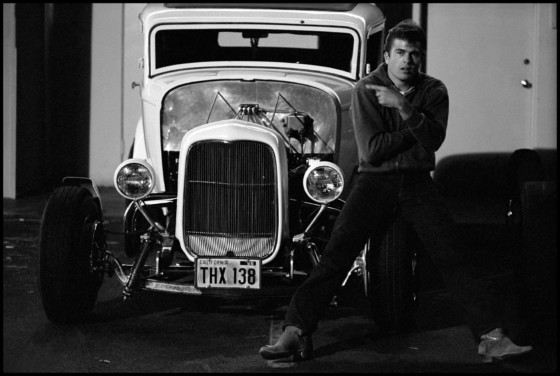 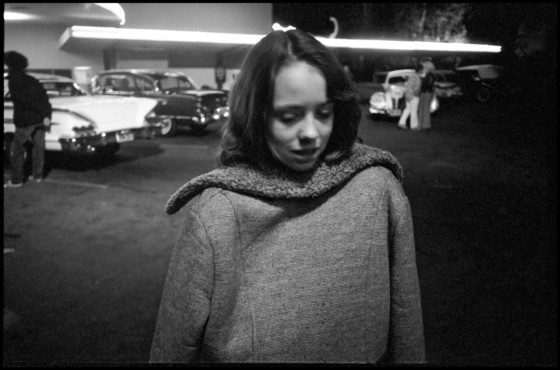 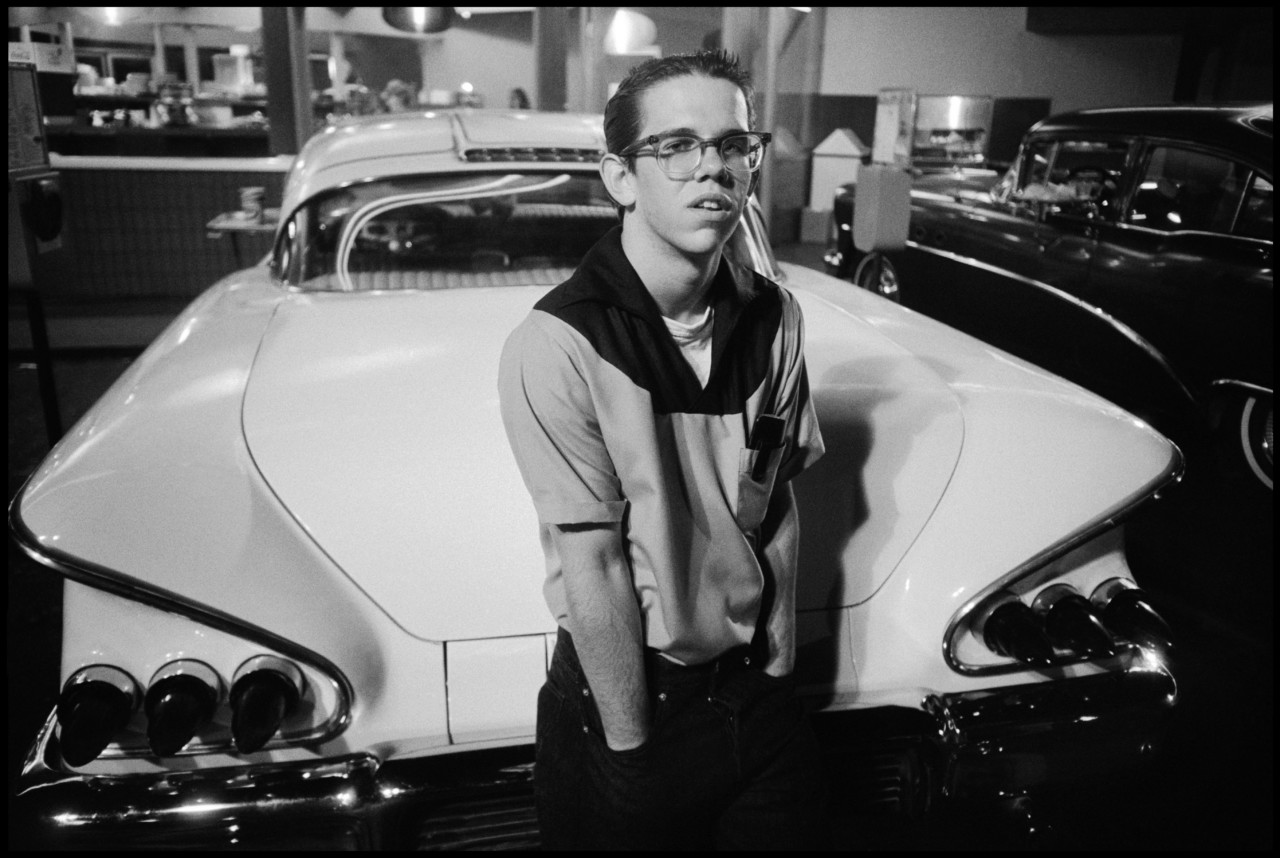 The character of John Milner, played by Paul Le Mat, is inseparably associated with his car, a bright yellow 32 Deuce Coupé that Toad affectionately calls ‘the bitchinest car in the valley.’ In Stock’s image, Le Mat perches on the giant wheel of his character’s vehicle. In another, his costar Smith stands behind the 1958 Chevy Impala that sets Toad’s night on an unexpected course, while, in another image, one of Mel’s roller-skating waitresses rests between takes perched on the Impala’s hood. In another shot, members of the Pharaoh’s gang appear jammed in their ’51 Mercury, almost humorously peeking out of the window.

There’s a bittersweet air to American Graffiti, a combination of nostalgia for a bygone era and acceptance of the characters’ various fates. The enduring tenderness and popularity of the film have ensured it remains beloved to this day, while plenty of the movie’s quotes have become well-known sayings. The film’s tagline asks, “where were you in ’62?” We may not have been in Modesto, California at that time, but for two hours, American Graffiti took us there.

Magnum On Set: Rebel Without a Cause 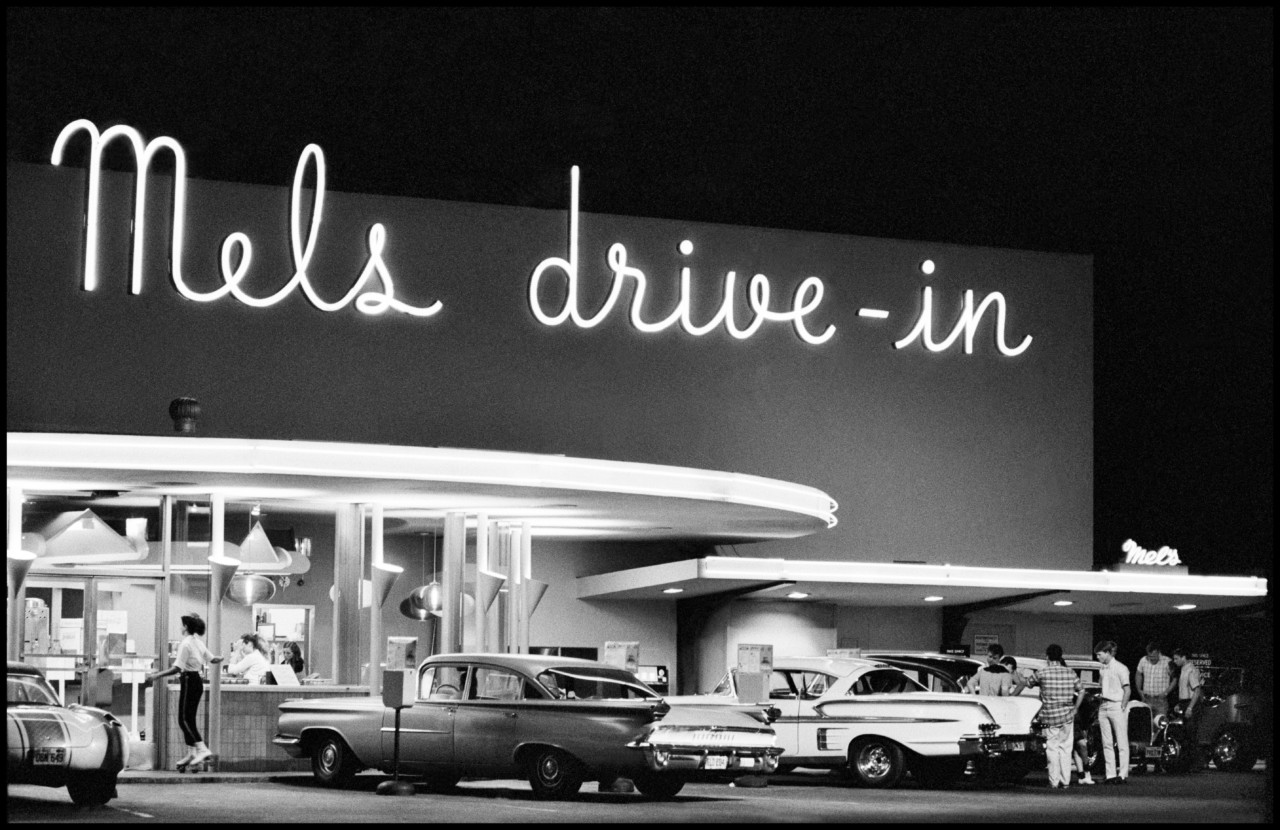 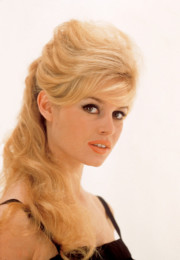 Brigitte Bardot Through the Lens of Nicolas Tikhomiroff

Inside the Chicago Playboy Mansion

Aberfan: The Village That Lost a Generation 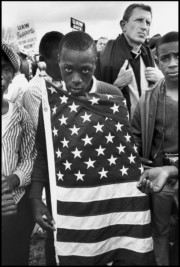 Muhammad Ali in a boxing outfit posing for a studio photographer. Chicago, Illinois. 1966.

Muhammad Ali is scared by a bee while visiting a movie set in London. England. 1966.